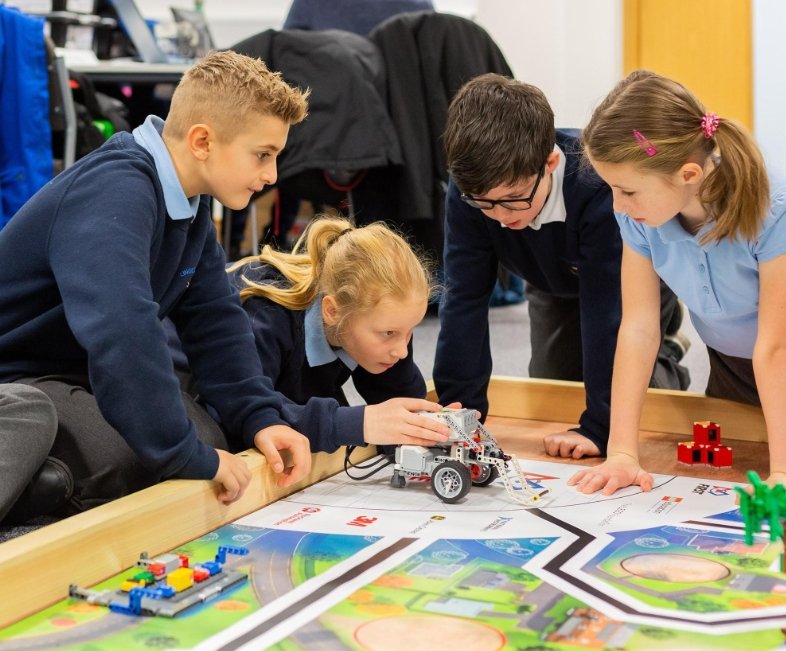 At BETT 2020, we had a very special guest on our stand, Ian Green the Senior Controller and Section Manager at the Nissan Skills Foundation. In December 2019 we were fortunate enough to be invited to work with Ian and his team on an ambitious project to provide the equipment and training required to enter over 80 schools from the North East into the 2019 regional heat for FIRST® LEGO® League. During his visit to BETT, we managed to talk to Ian in detail about the Skills Foundation and their involvement with FLL.

You can watch the full interview or read the transcript below:

How did you first get involved with LEGO® education and First LEGO® league?
So it started by accident really, three years ago we got a little bit of funding after winning a best community program in the North East and basically we hired a guy in, bought 12 Mindstorms robots and used them with some primary schools in that year’s competition. Well that was the kick off for us.

“One of the young learners, was terrible for attendance, he never missed a session when doing the workshops”

What is it about LEGO® Education and Mindstorms EV3 that provides the opportunity for kids to really develop 21st century skills?
A key thing for me is that a lot of young people are very worried or believe that they are not good at maths or they are not good at problem solving or they’re not good at science. Actually, the key thing with LEGO® is that it’s LEGO®, so they’ve played with LEGO® for a long time, it gives them the skills and the tools they need: if they can just put the thing together again, they’ve then got to learn how to programme it. As long as somebody can build it, and if they’ve got somebody in the team who is good at programming, not everyone has to be a superstar brainbox but a lot of people can get involved and have a positive experience with it.

In the first year you managed 40 schools, second year closer to 90 what led to such an ambitious increase in the project?
The big thing for me was just the response we had, so when we did the first 12 schools, it was really well received which is why we decided to go for the full competition.  Just a conversation with one of the teachers this year, I said “What impact has it had?” And he said “We run this as an after school and lunch time competition and what we found was one of the young learners, he was terrible for attendance, he never missed a session when they doing the workshops”. So, actually having access to the technology, something outside of school life he didn’t have, he was really attracted to it and it was life changing for him. So, after the school won one of the spaces at nationals, the head teachers would even cry when they won. He just said “We are taking kids out of a mining village and taking them to the national finals in Bristol”, so it’s a phenomenal achievement for them.

“After the school won one of the spaces at nationals, the head teachers would cry”

What skills do you see being developed that you hope will be inputted into the future workforce?
Yeah there’s obviously the creativity side so they have to be a little bit creative, and there’s the problem-solving side but not in a mathematical way, so they have to solve problems and deal with things that go wrong on the day. But there’s also the really important side like team-working, it’s building their confidence because that’s actually one of the issues we have with young people. They come in and they’re used to being in their room, they’re glued to their phone, but actually they don’t interact with people, but they have to interact with part of the competition. It’s all positive, everything we’ve said.

What are your plans for next year’s competition?
So, when we started first year, we had 43 schools, this show has 75 schools, next year we’ve got 90 teams and that’s 90 will turn up on the day, so there will be a lot more teams than that registering. I really want it to be full. If we grow bigger than that, we’ll make it bigger but I want to build on what we have achieved. The key thing for me is we’ve now got a really good regional final and I want to start being competitive at nationals and ideally, I want to get kids competing at the world finals so ideally that would be the ultimate achievement. Getting to the world finals is a win for them. They don’t have to win there but I would love for us to get to the world finals.

What was it like to work with CreativeHUT?
CreativeHUT were great, my team are used to running big events and we host a few of the finals for the competitions but we don’t understand this. So, this is new to us, it changes every year, and actually we couldn’t have done it if we hadn’t had the CreativeHUT team there to help us along, guiding us, basically running it for us. We were there, you held our hand, it gave us the confidence to have a fun event. Even if the teams didn’t win, they still walk away thinking really positive and that’s a key thing for me.

If you could describe FIRST® LEGO® League in one word or two words, what would it be?
One word? I would say it would be educationally-fun. So it is educational but I want them to have a fun experience because I think that’s a key thing, so that the youth can see that engineering can actually be fun and it is challenging, it’s different and that’s what we want the kids to come in and to see, that they can have a career in this industry and not just a job.